Crystal (Allison Janney) promises a golf cart for whoever "wows" her on the day of a big concert at the Sunshine Center. 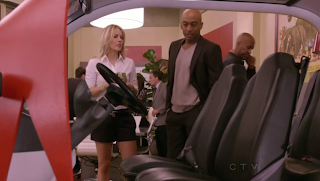 The vanity card of Matthew Perry's production company Anhedonia plays at the end of the episode; it's an animated Perry riding on a rollercoaster and saying "Meh" as it goes back down. That's all how I feel about this episode. It's Ben's (Matthew Perry) tenth year anniversary working at the stadium, but no one seems to know or care. There's going to be a big time time concert that night starring teen heartthrob Eli Cutler (guest star Nick Jonas in a preposterous self parody). Interesting to note that the name is likely taken from Eli Manning and Jay Cutler - two of the most reviled quarterbacks in San Diego Charger history. Considering the name and the city, he's appropriately obnoxious and intent on making Ben's life hell with his demands for no apparent reason other than his own entertainment.

Heather, Ben's secretary is graduating from the steno pool and is set to be replaced by Roman, Crystal's estranged son. She's sad to be leaving as she has developed an unexplainable attraction to Roman but she's tasked with training him for the day. Crystal decides to hold a contest that day for the Sunshine Center's most valuable employee, the prize being a golf cart to ride around the stadium in. Ben is aghast as he thinks people should be focusing on the concert, but she fills him in that it's just a scam to give a present to a certain someone who has been very important to her for a long time. Wink wink.

Alonzo and Alice , in there respective roles as public relations and corporate operations engage themselves in petty competition trying to win the contest. Trying to close a sponsorship deal with a wireless company, Alice (Andrea Anders) fills the corporate boxes with signed Eli Cutler memorabilia but Alonzo swipes it all to give to blind children who are visiting. She steals them back and follows through with it even when caught by Alonzo. The story thread abruptly ends with no resolution, and to be frank it wasn't very well thought through to begin with.

With everyone off doing favors for Crystal, such as detailing her car, installing disco lights in her office and constructing a giant churro cake for her, no one is preparing for the concert meaning Ben has to scramble around doing it all himself even though that mostly seems to consist of walking around really fast making snarky remarks. In the end, he's not even the prearranged winner of the golf cart as he had assumed - Roman is the winner as Crystal wants to try and reconnect with her son. Pouring out his frustration to Crystal, she seems nonplussed and tells him he can have the rest of the night of. It's not really an option because the concert is awash in a sea of ruin, Cutler refusing to take the stage and all.

Ben makes to leave but something pulls him back and he goes to Cutler and talks it out of him. Cutler is worried that his music is no good but Ben assures him that it is - seems sometimes people just need someone to tell them they're good at their jobs, including Ben himself who admits he really loves his job despite all the crap he's put through. Later on during the concert, he's approached by Crystal who sincerely thanks him for all the hard work he's put in over the years. The episode ends with another poorly thought through story thread. Heather doesn't want to leave and suggests to Roman the only way she'll be able to stay is another gas can incident (she lit her ex-boyfriend on fire) so he sets the golf cart on fire. I'm not really sure what that's supposed to achieve - perhaps by incriminating himself, Heather will be forced to stay on, I suppose.

Ben got really whiny in this episode. Matthew Perry plays embittered well but the show is lacking in finer details. As mentioned, he didn't actually seem to have much to do besides walking around telling other people to get back to work. The Alonzo/Alice story was a train wreck from start to finish and I don't get the Heather/Roman thing at all. Allison Janney as Crystal is definitely the show's strongest feature though; she's gloriously unhinged. Overall though, the episode lacked cohesion, and the characterization was very inconsistent. So growing pains after a decent pilot or signs of a fundamentally flawed show? Remains to be seen.