Beverly is worried about her relationship with Sean who seems to be getting closer to Morning. 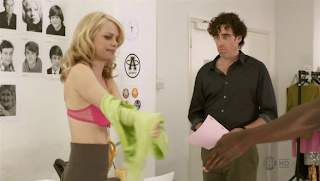 It's still not especially funny, but at least it wasn't as terrible as last week. Morning (Mircea Monroe), the lead actress in Pucks is eager to get the right look for her character and is showing off for Sean (Stephen Mangan) and complimenting his great writing. Beverly (Tamsin Greig) happens by, and is startled by her toplessness in front of her husband. She's suitably unimpressed and later tries to encourage Morning to dress more conservatively considering her role as a school librarian. The pleas fall on deaf ears what with Carol (Kathleen Rose Perkins) showing up and apparently loving the non-existent skirt.

Beverly and Carol get a chance to talk and exchange insecurities while Sean heads to a Rape Prevention benefit with Matt and Morning. Beverly is insecure, picking up a vibe about Sean and Morning while Carol has been 'secretly' dating Merk who was going to leave his wife for her until she (the wife) went blind. Carol was left as the perpetual mistress and is distraught over it. At the benefit, Matt reveals to Sean his game plan of forcing Sean and Morning together. She's dressed seductively as always and tells Sean she had watched every episode of Lyman's Boys (Pucks' source material) ad truly admired him.

A flustered Sean returns home and when quizzed on the benefit by Beverly, attempts to hide the fact Morning was also there. He admits the mutual attraction but assures her that nothing has or will happen. However, later in the night, he steals away and loads up an illicit sex tape of Morning that Matt had tipped him off about and jerks off to it, not realizing Beverly is watching him.

This was a marked improvement over last week but it's still not great. It sort of feels like Episodes is trying to be both a very English and very American comedy at the same time, but is really succeeding at neither. The introduction of a rival British comedy writer for the couple who has achieved greater success in this episode hints towards what's coming. In the final two episodes of the season, presumably disillusioned by the impending failure of Pucks, Sean will drown his sorrows between Morning's lavish assets and Beverly will storm out in a huff. Did you hear that? Only two episodes to go! I can't wait until it's over, it's been painful.