Matthew Perry is Ben Donovan, manager of the Sunshine Center, a multi-purpose arena, who is forced to re-evaluate his life when he turns 40. 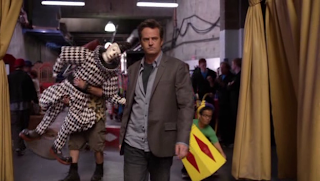 Recap of the pilot after the jump.

We'll have to see how this turns out but so far it looks OK. Matthew Perry (future star of the Bill Simmons movie) stars as Ben Donovan, manager of the Sunshine Center in San Diego. The pilot episode does a solid job of setting up the scenario and characters and moves at a good pace but didn't have any bowl you over moments. That looks like it has a good chance to come, given time.

Characters:
Ben Donovan (Matthew Perry)
When you've starred as the same character for eleven years, it can be tough to break away from it even if the next character you play is not really that similar. Ben is slippery, selfish and perpetually grouchy (a bit like me). I always like the flawed leads who are angry at their own lives, and I think I can get behind this guy. Throughout the episode he starts to realize he might need to adjust his attitude if he's ever to find a little contentment... but it's not going to happen overnight.

Alice (Andrea Anders)
The former star of Better Off Ted is initially introduced as a love interest for Ben, a marketing executive at the Center. While that's a tantalizing possibility for the future, for now he'll have to be content to just be her friend. Her moral center seems to be as maladjusted as Ben's, but she too has started trying to correct it.

Bobbert Bobbinson (Jorge Reyes)
I'm not sure if it was just a guest spot, but he was in there nonetheless as a janitor. Ben can't remember and doesn't really care what his name is and thus dubs him 'Bob'. He gets a few good throwaway lines in.

Crystal Cohen (Allison Janney)
Ben's mentally unstable boss, the owner of the Sunshine Center. She appears to be slightly bi-polar and has a surprising amount of physical comedy. While we got to see a lot of silliness, with Ben struggling to correct her gaffes, I hope we'll get to see a little more of what makes her tick. Is her wealth self-made? That seems to eb what's implied and it would be nice to see how it happened.

Alonzo (James Lesure)
A former player on the ice hockey or basketball team that played at the Center (they got relocated to Cincinnati) he's set up as Ben's best friend, even though Ben admits hating him. Always cheerful, he's secretly dating Alice and has asked her to move in with him. I presume breaking him into tiny pieces lies somewhere ahead.

Heather (Portia Doubleday)
Ben's air-headed secretary. Eager to please her boss, her enthusiasm rubs him the wrong way considering her criminal background - setting her ex-boyfriend on fire pointing towards her obsessive nature.

Roman Cohen (Nate Torrence)
Crystal's odd-looking son who is possibly developmentally disabled - he comes seeking a job and Ben struggles with babysitting him.

The plot of the pilot revolves around a circus performance being put on at the arena which is really just an excuse to let loose clowns and an elephant on screen. The elephant in particularly is somewhat jarring and not quite in keeping with the rest of the episode. There is a clear chance for some of these characters, particularly Alonzo and Roman to get old very quickly without careful writing but I'll reserve some cautious optimism for the future of this series.