Jeff (Joel McHale) gathers the study group for a game of Dungeons and Dragons to cheer up a depressed classmate but fails to include Pierce who is belligerently irked when he finds out. 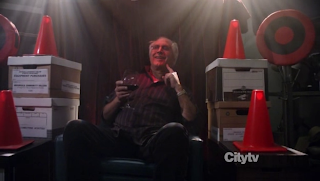 Recap after the jump...


Time for an all new episode of my favorite show on television currently airing, Community! Now apparently the guest star of this episode, Fat Neil (Charley Koontz), was introduced previously, but like Rich of episode 12 "Asian Population Studies" I don't remember him at all. It's not really crucial though, all you really need to know is that he's fat and he loves Dungeons & Dragons.

The premise of this episode with a crack game of D&D set up so the group can cheer up a depressed (and possibly suicidal) acquaintance seemed a little off, a transparent attempt to shoehorn an episode about fantasy role-play into a network sitcom. Then again however, this is the series that gave us a space shuttle mission set in a bus being towed. I really liked the dramatic Lord of the Rings style narration opening the episode, a change up that no other show could pull off but, and this seems a ridiculous criticism for a show so meta, what followed veered off into being too self aware! It didn't feel natural, at least.

Well they get into the game, with Abed (Danny Pudi) serving as the Dungeon Master having prepared character profiles for everyone to choose from. Neil, much like me, is slightly bemused by the whole affair and the groups motives at first but goes along with it. However Pierce (Chevy Chase), furious at being left out, gatecrashes the party and for the second week in a row takes on a role as grandiose out of control villain. He forces his way into and ruins the game, taking particular glee in taunting a distraught Neil. After being forced to wait outside the room by Abed, he is very conveniently able to find and absorb a wealth of advanced D&D knowledge in an inordinately short period of time.

Meanwhile, the rest of the gang strives to find a way to to undo the damage caused to the game by Pierce eventually leading to an extraordinarily disturbing and hilarious scene involving verbal coitus between Annie's "well endowed" male character and Abed's bar wench. At length, they've managed to maneuver themselves into  position to bring Pierce back and do battle, but the curmudgeon's new found skills overwhelm them. Reveling in his victory, Pierce reveals that Jeff, spearhead of the charge to enliven Neil was in fact the inventor of the nickname Fat Neil, the start of all his problems.

Having spent most of the episode silent and forgotten (to me anyway if not necessarily Pierce), Neil is able to turn the tables on the old man and win the game. He decides he's all better and Pierce apparently helped by proving he's even more pathetic than Fat Neil. It doesn't mesh together all that well, did I mention that the plot of this episode seemed awkwardly shoe-horned in? The episode ends with it being revealed that the dramatic narration throughout was done by the random cleaning lady, a twist that made me roll my eyes a little because I really didn't care about that 'mystery' or another random element being forced in.

Jeff's ownership of the group continues as he works his way along becoming a more willing leader. While he seemed to be trying to right his past wrongs in this episode, perhaps it's just an act as he was learning to be 'perfect' from Rich? I certainly hope there was some acting out going on by Britta. It's either that or bad writing accentuating her most extreme characteristics in this outing. Annie meanwhile continues to build on her drive for independence, taking the initiative again in this episode as she grows in confidence.

I hope they find something new for Pierce to do - while he makes a fantastic villain, it's not something that should be overused or they will be left with nowhere to go with him. It was a quiet episode for Troy but Abed got to show off a little slick, using his GM status to manipulate the womenfolk. For me, Shirley's time is up I'm afraid. She adds nothing to the show and her team mom role could easily be filled by Britta in a far more entertaining way.

I'm left with mixed feelings about this episode. While it was packed full of entertaining moments, it didn't mesh as a cohesive unit. The slightly surrealist nature of the show is part of its appeal, but they can do a better job of fitting it all together than this.A Dungeons & Dragons episode at this stage just seemed out of place.