Through a series of phone calls, the story of Zoey introducing Ted to her attractive cousin (guest star Katy Perry) is related to Marshall. 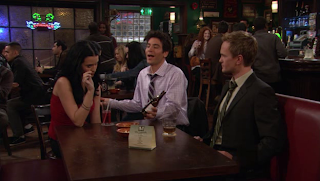 Recap after the jump

Marshall (Jason Segel) is still in Minnesota after his father's death and is eager for news from New York. Robin (Cobie Smulders) happily obliges. It all started with a botched attempt on her part to cook (Christmas?) dinner which ends up with Zoey (Jennifer Morrison) promising to introduce Ted to her attractive female cousin. Flashforward to the new year, the gang haven't seen her in quite some time and Ted reminds her of her promise. Cue the entrance of the getting-weirder-looking-every-day Katy Perry as a ludicrously gullible airhead whose relating of her various mishaps and misunderstandings consistently elicits a sympathetic "Oh, honey!" from the listener. She doesn't make an impression on Ted and Robin later coaxes out of him an admission of his feelings for Zoey.

The next art of the story is told by Barney (Neil Patrick Harris) who has apparently been watching The Wire lately what with his use of burners. Ted, according to him, bores Honey with architectural babble and she takes off with Barney for the night. The next day, he's heading for work when he spots Zoey. When he tells her of his exploits with honey, she spontaneously hugs him! Marshall's brother, eavesdropping (as is his mother) puts the story together and figures out that Zoey reciprocates Ted's strong feelings which is why she was so happy Honey ended up with Barney instead.

Cue a phone call from Lily continuing the story - Zoey goes to visit Ted but he tells her they can't see each other anymore because.... because why? Ted, reaching for an excuse tells her it's because Lily hates her. Chasing up on this suspicious story, Zoey goes to Lily who tells her that in fact it's Robin who hates her... and Robin tells her it's in fact Marshall who hates her. Just then Marshall receives another phone call from an unknown person. Fearing it's Zoey he's relieved to find it's in fact Honey. She tells him that Zoey has been going through a hard time lately - easily deceiving her, the final pieces of the puzzle fall into place.

It seems she is divorcing the Captain, leaving her free to date Ted. Coincidentally at that moment, she's visiting him, convinced he hates her. Ted lists his reasons, but at that moment she's called by Marshall playing matchmaker. He then finishes the the string by calling Ted and giving him the same message and the episode ends on a sweet note, Ted and Zoey finally getting it on.

A nicely put together episode with a plot structure which seems to be unique to this series - at least it knows how to put it to effective use. I enjoyed it a lot - the flow was very good and the jokes were not laid on too thick apart from maybe Honey's naivety although some of that could be put down to unreliable narration. While it was a noticeable notch below the very best this series has offered in the past, lacking any real character defining moments, it still did enough to warrant a high grade. The only criticism really is that surely Zoey can't be the mother - With Ted not being able to remember Honey's name (honey being merely their nickname for her) and Honey apparently being privy to many of Zoey's deepest secrets, it suggests it's unlikely at least.

Email ThisBlogThis!Share to TwitterShare to FacebookShare to Pinterest
Labels: tv episode recap How I Met Your Mother