While waiting to talk to the principal at a school, House tells an unbelievable story to two children in exchange for their own story. 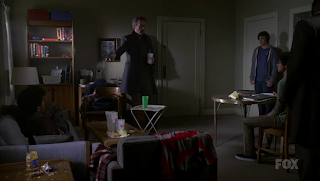 The first season episode "Three Stories" was one of the best hours of television ever, period. This attempt to recreate the magic is not as successful but still had entertaining moments. The structure of the episode was very unusual so bear with me. We'll start with the kids (played by Austin Michael Coleman and Haley Pullos) who are caught just as they're about to kiss behind the school and sent to see the principal. Also waiting they find is House. In exchange for his own story about why he is there, he wants to know why they're there and why the girl has a bruise on her face.

It's told incrementally, but chronologically the bruise is because while playing hockey in gym, the boy not wanting to underestimate the girls skills as a goalie slaps the puck as hard as he can and it careens through the air and off her cheek. She then challenges him to a jump rope competition with a kiss as the ante but he rigs the competition. During the next recess, she goes up to him while he's playing basketball and tells him she wouldn't kiss him even if she had cancer that could only be cured if he kissed her. Hmmm. This is just a show so it doesn't seem like she's too eager but they meet up later and she prepares to pay off the bet but he stops her and tells her that he doesn't want their first kiss to be based on a bet - he likes her, he thinks she likes him and is willing to wait until she is ready so it will actually mean something. A few days later she passes him a note telling him he's ready which is where they find themselves at the start of the episode. Awww.

House meanwhile is having his own girl troubles, again my re-telling is chronological unlike the episode. After a night of passion with Cuddy, he leaves the following morning slamming the door in his wake awakening Rachel before Cuddy is ready to deal with her. As she makes her way through the house, she's confronted with the wreckage House has left in his wake including using her toothbrush which she has berated him for before. She confronts him about it, tells him that all these little things pile up, that he only thinks about himself and even though he may truly love her, he doesn't care about her. She doesn't want to talk to him and appears on the verge of breaking the whole thing off. Naturally, he responds by creating an ammonia related distraction and stealing her laptop, hoping to read her files so he can gain some extra insight into her.

A patient is brought in who ends up coughing out part of his lung. While the team runs a battery of tests, House is more concerned with the laptop. Visiting the apartment of the patient, a college student at Rutgers, House has his roommates crack the password on Cuddy's laptop. He notes that Cuddy really wants to get Rachel into a particular school so he goes to a suit at the hospital who also happens to be on the school board and asks him to swing it for him. In exchange, House has to go speak at a career day at the school. On his way there, he's talking about the treatment with the team on his cell when he rear-ends an advertising guy who is also on his way for the career day. Naturally, House gives him a fake name so he can avoid paying up.

At the school, he aggrandizes the details of his job, or at least certain parts; what's true is really no more believable than his claims that he shot a roommate of the patient Pulp Fiction style. The form teacher is unhappy with his... unique storytelling, but the class eggs him on to complete his story. Along the way, he slips up, recalling a meeting with Dr. Hourani whose name he appropriated. The advertising guy Don Dave realizes he gave a fake name and demands to see his ID. The shouting devolves into a brawl between Dave and House at which point, House is sent to the principal. Once he has his meeting, House is contrite and pleads with the principal to give Rachel a place at the school. While inside, he spies a poster for the Princess and the Pea and has his EUREKA! moment, deducing that the patient must have swallowed a small piece of food down the wrong pipe leading to his current problems.

Back at the hospital, House visits Cuddy and for some reason she forgives him - he even bought his own toothbrush. Looks like it all worked out in the end. This episode was so odd. I really appreciated the structure, affording the backwards storytelling and unreliable narration, providing some great laughs but it didn't really lead anywhere or reveal anything groundbreaking plot or character wise. We've already covered this ground; House treats her like crap but deep down he really loves Cuddy. What was up with the school teacher? Show some backbone lady, don't acquiesce to the demands of the class; you should be controlling it, not them. The kids in the class were annoying but the couple House was talking to outside the principal's office were sweet, particularly the aggressive wise-beyond-her-years girl who seemed to remind him of Wilson. A fun if insubstantial hour of TV.