With the show on a forced hiatus, Pete and Frank form a band and record a song. Meanwhile Liz, after her break-up with Carol (Matt Damon), has "given up". 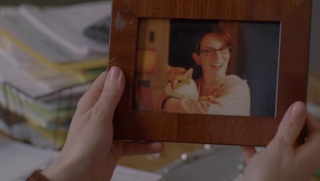 Good God, this episode was dumb. Oops, where was I? Because of Tracy's fake trip to Africa, the show is suspended but everyone is still hanging around work anyway for some reason. Avery has left town to do some on-site reporting so Jack (Alec Baldwin) is left alone with baby Liz and as he is busy with forthcoming Kabletown negotiations, hires a nanny. Adult Liz (Tina Fey) meanwhile has given up on dating and is determined to be a spinster for the rest of her life, even buying a cat which she has named Emily Dickinson. Jenna is particularly disturbed by this turn of events and is determined to right the situation.

Mulling around the set, Pete picks up a guitar and reminisces with Frank about how he supposedly was in the band Loverboy for three months. They jam together and decide to form a band with a song they've improvised named "It's Never Too Late For Now". They record together but musical differences quickly threaten to tear them apart. Jack tries to negotiate a salary with the nanny but is unable to drive a hard bargain because he's coming from a position of weakness needing someone to care for his daughter. His pleas are met with stony silence until he caves and offers the nanny whatever salary she pleases.

Liz goes from watching Murder on the Orient Express to watching a technician editing the show but the technician is taken ill with foot poisoning and she's subsequently dragged away by Jenna to go to a nightclub. Liz normally hates nightclubs but this one is strangely suited to her with soft music, ample seating and clearly marked fire exits. She tries to buy a drink and finds her ID is missing, but it's returned to her by a handsome stranger, Anders, who shows up and makes a Star Wars joke. They quickly discover they have a lot in common and he buys her a drink but then a fight erupts and they decide to leave instead. Outside, she makes to go home but he seduces her with the line "It's never too late for now!", they kiss and an immoral liaison follows.

The next day, Jack uses the same negotiating tactics as his nanny in the meeting with Kabletown and has great success. Liz turns up after her one night stand and everything seems to click into place - doing her best Poirot impression, she puts together the strange conspiracy behind yesterday evening. The editor's sandwich was poisoned by Kenneth, Pete stole her ID card, the fight was started by Lutz, Toofer and woman writer who never speaks and the strangely perfect club was set up in Tracy's home by Grizz and Dotcom. Finally, Anders was actually a Swiss gigolo hired by Jack. The conspiracy has its desired effect though - the night of passion has made Liz reconsider her spinsterhood and she does a Favre on her decision. The episode ends with a performance on MTV (?) of "It's Never Too Late For Now" by Pete and Frank who've patched up their differences.

The Liz part of the episode was acceptable, but the other stuff was garbage. The Pete/Frank storyline was tired and Jack's storyline with the negotiating was awful and annoying. Overall, it was very convoluted and not a memorable outing for the show. I wonder why the show had to stop for Tracy's absence? His name is in the title, but they still have the Canadian actor they hired.