Despite mastering the controls, the second case ends up disappointing. As a standard filler case, it works fine but it just felt like there was something missing... I can't quite put my finger on what just yet.
My concerns about the lack of clear cut off points between chapters were confirmed - They seemed forced, with the difficulty and length of each section feeling inconsistent. The partner system also feels clunky in that access to them doesn't flow with the game and beyond the typical Gumshoe humor, doesn't seem to add much to the investigation. We shall track if that changes with the upcoming cases. 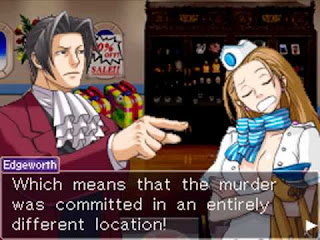 "Turnabout Airlines" spoilers after the jump.
"Turnabout Airlines", the second case of the game begins with a murder on an airplane and remains within the confines of the plane and the airport lobby throughout. It almost felt like a bottle episode and although Ace Attorney as a series is fairly linear in nature, your movement and actions feel oddly restricted in this case. Both Edgeworth and a flight attendant fall under suspicion before the real killer is unveiled and the result felt a little convoluted - it ended up having a similar vibe to Turnabout Big Top, at least for me.
Something interesting I noticed is that whoever did the localization appeared to give up trying to pretend the game was set in America - the plane took off from Borginia in Europe then had a stopover in Zheng-Fa, an Asian country. It's much more likely given those circumstances that the final destination was Japan rather than Los Angeles.

Rhoda Teneiro
A "professional" flight attendant who makes a citizen's arrest of Edgeworth after finding him in close proximity to the body. She acts suspiciously throughout and is eventually arrested herself. It turns out her motives are far more innocent and embarrassing than having murdered anyone. Having submitted a terrible design for a suitcase, she has been secretly buying them herself as they have failed to sell. It's implied that after being out-debated by Edgeworth and then saved by him, she develops quite the crush.

Akbey Hicks
The victim, an Interpol agent from the downtrodden nation of Borginia. They have a rough time, those Borginian Interpol agents. Hot on the trail of the smuggling ring, he's pushed to his death despite having actually uncovered nothing at that point in time.

Zinc Lablanc II
Hopefully this irritable merchant doesn't pop back up somewhere else because he annoyed the hell out of me. I can safely say that even though Borginia doesn't actually exist, the time and money obsessed Lablanc is a crass stereotype of that nation's denizens!

Cammy Meele
At first I was all "Hah, it's Camilla except with giant plastic breasts!", but then it turns out she's the real killer which was a bummer because I was hoping it would be Lablanc. While actually a member of an international smuggling operation, she puts on a sleepy, ditzy act which considering the haphazard manner of the murder and cover-up may not actually be an act.

Franziska von Karma
Another triumphant return for Franzy, this time as the lead prosecutor on this case. Once again, Edgeworth gets the better of her but at least she gets to take her whip to Detective Gumshoe as consolation! She is on the trail of the smuggling operation and upon conclusion of the investigation promptly leaves to continue her own quest. There were subtle signs of maturity, but for the most part, she's still the same insecure little girl attempting to prove her superiority.

Sal Manella
A one-scene cameo by the creator of Edgeworth's beloved Steel Samurai franchise! It's too bad that he avoided Franziska's whip, though. :(

Angel Starr
Sadly unseen, but the Lunchland business she started is apparently now thriving with vendors in the arrivals lobby. Gumshoe is a big fan of the steak lunches.

Story-wise it's a good bet that this International Smuggling Ring is connected to the Legendary Yagarasu introduced at the end of the last case. Either they are stealing things for the ring, or they are an honorable thief trying to prevent them from stealing... so that they can steal it themselves. While we're on the topic of smugglers, wasn't Machi Tobaye Borginian? So what are you saying Capcom, all smugglers originate in Borginia?Yet more crass stereotyping of a poor down-trodden nation!

Until next time...
Posted by jigenzanittou at 00:57