It's love at first sight for Kate (Sarah Chalke) and Ben (Jason Biggs) but their respective best friends Connie (Judy Greer) and Larry (Tyler Labine) are highly skeptical about the whole affair. 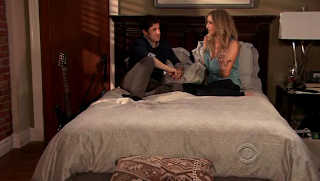 
I pretty much only watched this pilot because Sarah Chalke, who was awesome in Scrubs was in it, and from a distance, Jason Biggs looks a little like a skinny Josh Radnor so the coupling could pass for Ted and Stella but I'm not sure how much I'll continue to watch because it didn't really appeal to me. Generally, sitcoms where the focus is on (a) predetermined couple(s) are of no interest to me whatsoever. As Matt Le Blanc  explained, there's no suspense, nothing to root for. Just this year, I've dodged the awful looking Better With You and even though Perfect Couples boasts Olivia Munn amongst its cast, I haven't tuned in.

The way Kate and Ben meet on the rooftop of the Empire State Building for the first time is a direct callback to Sleepless in Seattle, with the same dialogue and all. It's probably just a Valentine's Day related coincidence but the episode of How I Met Your Mother on the same night on the same network also referenced that film. But like their cynical friends, I don't buy it. Ben (Jason Biggs, slummin' it on TV) seems like a pretty wishy-washy character right off the bat. His best friend Larry is played by Tyler Labine who I loathe the very sight of, thanks to a horrifically terrible-in-every-possible-way storyline on Reaper involving Eriko Tamura whoring herself out to Hollywood as his step-sister who succumbs to his "charms". I didn't realize he was in this show and combined with the weak plot is why I am unlikely to return to this show, I'm not a fan of that sort of character he seems to end up playing a lot.

The cast is rounded out by Judy Greer, probably best known for playing Kitty (George's secretary) on Arrested Development. As Connie, she has hate at first sight with Larry which no doubt will later be ground down into love when he sands down his rough edges and becomes a surrogate father for her young children. Greer was the last of the main cast to come on board fairly late in the process. Looking through all the changes that happened before the show even made it to air it's not just about to become a train wreck, it already is. It seems like the show was originally written as a vehicle for Friday Night Lights star Minka Kelly who left in the summer to be replaced by Chalke. Likely that she didn't impress and got replaced by the network who picked up the order after that change. Among a host of other casting changes, Lizzy Caplan of Party Down was meant to play Connie but also left. What a mess.

A quick comment about the character Tiffany (Sarah Wright) a friend of Kate and Connie's who appears to be the nanny for Connie's kids. C'mon, characters like this who are too dumb/ditzy to live don't become nannies. I know that sitcoms are supposed to have suspended realities, but unless it turns out Tiffany is Connie's sister or something, the dumb blonde thing for that character does not work. I debated giving this a Bronze since it had a couple of sweet moments, but I just don't buy into the central concept of the show which is a pretty fatal flaw. When I say that, obviously pretty much every show out there has an unrealistic premise, but they're either slick and well written or have good enough characters to work around it. This show has neither.