Pierce (Chevy Chase), supposedly on his deathbed, calls the group together to deliver his last words and gifts. 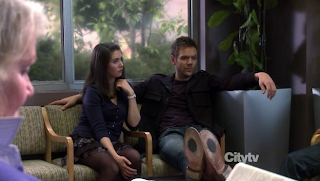 The end of the last episode saw Pierce sprawled on a park bench passed out after overdosing on painkillers and that isn't left unresolved, landing him in the hospital. As Abed films the proceedings in a documentary style, Pierce spins a story about how he is dying and wants to give each of the group something to remember him by - but he reveals that actually, he's not dying and is using this opportunity to exact revenge upon the group for the lack of respect offered in recent times.

One by one he calls them into his private (!) hospital room. First up, Shirley and he tells her he's always thought they had a connection as the least respected members of the group. She's perturbed by this and disbelieving but he hands her a CD which supposedly has a recording of all the bad things said about her behind her back. Next up is Britta. Pierce hands her a blank cheque of $10,000 for the charity of her choice. OR. As he notes just as she is leaving his room, she could put her own name on it. Hmmm.

Next he calls Annie, but Jeff, suspicious of the charade jumps the line. Pierce announces to him that after investigation, he's found Jeff's real father and has called him to the hospital. Jeff is highly skeptical and claims not to care anyway, although as inter-cut footage shows, he's full of nervous energy at the prospect that his erstwhile deadbeat dad could show up at the hospital at any moment.  Meanwhile actor LeVar Burton shows up at the hospital at the request of Pierce to meet Troy. Earlier, Troy had talked about how he was hoping to be bequeathed a signed photo of Burton, but as he had previously told Pierce, he never wanted to meet the man as it would destroy the myth. When he shows up, Troy enters a state of shock and is unable to do anything but stare with his eyes wide open.

Annie goes in next and is given a tiara that is supposedly a family heirloom because she is Pierce's favorite. What does it mean? She can't figure it out. Britta decides to give the money to the Red Cross but admits that if she wasn't being filmed, she would have taken it for herself. Tired of Shirley "forgiving" everyone for what was supposedly said behind her back, she then forces her to listen to the CD and it turns out to be nothing worth getting worked up over. Jeff, becomingly increasingly agitated storms into Pierce's room to deny that he cares - and also to tell Pierce that if he is lying, he will beat him senseless, and not in a cute way either.

Burton is confused about Troy's reticence but Britta convinces him to stick around, inadvertently prolonging Troy's agony. Jeff is outside watching for his father when he gets a call - it's his father phoning him from a car in the lot and telling him that he can't exit the car and must now leave. Jeff races up to the car, forces the door open and pulls Pierce out and the other group members surround him pull him away as he tries to attack him! Pierce exclaims that he just wanted respect because everyone treats him like a joke - it wasn't disproved here. Jeff admits his issues with his father and Pierce admits that Annie actually is his favorite. Pierce later tries to claim that he and Jeff are now like father and son which Jeff hastily rejects.

This episode was awesome, full of laughs with a very compressed structure. Community is always trying to do something different, sometimes it doesn't come off as well as it should and sometimes it's outstanding like it was here but it gives the series a massive range of options, never limiting the scope it can apply to itself. Here, with minimal plot, it really allowed the characters room to be showcased. Aside from Troy who was mostly silent, they generally played to type but with the dynamics well established, that's a good thing.

I wonder what Abed was bequeathed? Maybe Pierce never got around to him. I hope Troy at least got a signed photo out of his ordeal. I loved his Firefly reference, being a fan of the show myself. Did this episode signal the end (for now) of Pierce's run as a villain? Hopefully we'll see something different develop in the next few episodes, presumably to do with Chang and Jeff living together. Hopefully we'll also hear more about Jeff's father before the end of the season because presumably Shirley's pregnancy will also be largely featured towards the end and we need something to avert our attention from that nonsense.