The one time I'm rooting for the Steelers and they go and lose. Thanks a lot, guys. I still think if it hadn't been for that bogus personal foul on the last kickoff, they would have had the mentality to drive up and score. OK, at this point I'm clinging to threadbare strands of hope. I'll just list a handful of things that I took note of during the game. If I have the time and clarity of mind, I'll sit down and write a piece about why I was rooting against Aaron Rodgers and the Packers some other time. 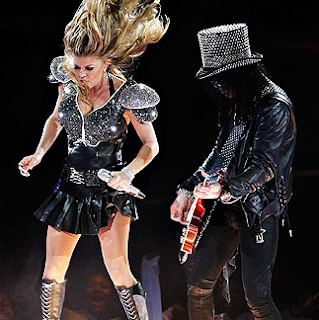 Oh right, I should mention that I stand corrected - I assumed it was Fergie on stage because the Black Eyed Peas were meant to be performing, but having inspected the face it turns out it was Axl Rose trying out a new look.