Beverly tries to hide her infidelity from Sean as they prepare to fly home following the failure of their pilot. 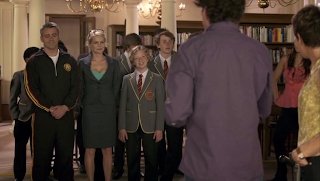 It's over, thank the Lord. It wasn't particularly funny either, mostly mildly horrifying. We pick up shortly after the end of the last episode... seven minutes, max? Joey Matt and Beverly are lying in bed together post coitus and she's having a major guilt attack. She schleps her way home and Sean is just happy to see her back assuming she was on a plane back to England. He notes that she smells of cinnamon (Matt's cologne) but she claims she ate a bun. Shooting wraps on the pilot for Pucks but in the editing room, the show just doesn't seem to be coming together. This is also the opinion of network exec Merc who blasts the quality of the show in spite of Carol trying to defend it. It's not picked up and Sean and Beverly prepare to leave LA to go home.

Sean goes to Matt to say goodbye but becomes suspicious when he smells the same cinnamon smell that Beverly was cloaked in. Matt offers to give him some cologne so they head for the garage. Sean notices the Jaguar is missing, and Matt spins some BS story about hitting a deer, but the truth is eventually smoked out. Sean gets pissed and starts throwing bottles of cologne at Matt. It devolves into a full on brawl with eye gouging and everything. At length, they drag themselves over to Sean's house. Beverly has been calling him as they will be late for their plane but he's pissed and they have a huge argument which ends with him declaring that once they return, they'll be separated. Just then though, Matt gets a call from the studio, followed by one made to the house. It's Merc and Carol - presumably lacking other shows, the network has picked up Pucks! Everyone gets to stay in LA after all, awww.

As high farce it was OK, but fairly predictable. Merc seems like the kind of character a disgruntled writer would create. It sounds like the show will get a second season, but it felt kinda like hard work watching it. I wouldn't recommend it in any case.