After losing a custody hearing, Matt gets wasted and calls Sean to drive him home in the middle of the night. Hilarity ensues! Or, as the case is more likely to be, not. 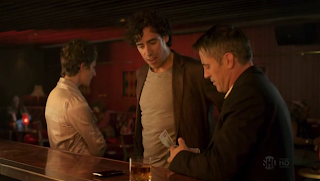 The episode opens with the gang filming their pilot episode for "Pucks". The scene is pretty terrible and horribly unsubtle which I suppose was the intention. Sean (Stephen Mangan) delivers the news to Morning (Mircea Monroe) that her character has been 'upgraded' from lesbian to bisexual. She gets all excited and enthusiastically celebrates with him, drawing the ire of Beverly (Tamsin Greig). Later while the couple are at home bickering, Sean receives a phone call from Matt begging him to pick him up from the bar so he can avoid having his picture taken by his "nemesis", a paparazzo that Matt had assaulted in the past while drunk.

After being forced to admit she has made no friends while in L.A. (just like me she has a healthy loathing of the human race), Beverly tags along on the rescue mission. They expect to find Matt in a state of depression after losing a custody hearing, but he's actually in high spirits thanks to some guy who can supposedly shoot his glass eye across the room. What follows is particularly uninspired; Sean and Beverly head outside to distract the photographer, concocting some cheeseball story about having just got engaged while Matt sneaks behind to their car... except he can't find it and gets snapped anyway as he scuttles back and forth.

Matt directs them to drive him to what they think is his home. Obviously, as comedy hi jinks are supposed to be unfolding, it's actually his ex-wife Diane's home. She folds rather easily to his demands to see the kids, sparing us from any further botched attempts at humor at the expense of a loaded Matt LeBlanc. On the ride home, Matt's mood adjusts to his situation and Beverly, taking pity on him softens her stance and offers to let him sleep at their house for the night so he won't be alone. They make up (aww) and he vomits on her a little (eww).

It doesn't last long. By the morning, he's back to his usual obnoxious self, calling Beverly "Betsy" (her hated nickname) and while they were sleeping, Matt's girlfriend Kendra- actually, the less said about this part and the cringe-worthy Jamba Juice confusion, the better. Essentially what the final scene shows is that absolutely nothing of any substance happened in this episode.

I was going to say that I couldn't decide whether or not I liked this show, but having just recapped it, I can say with some confidence that I don't like it. It can't seem to decide whether it wants to be extremely silly or somewhat serious and swerving back and forth between the two does not work at all. I also have a hard time caring about any of the insipid paper-thin characters, though mercifully Merc (John Pankow) was missing from this episode. Episodes' main problem is that it's just not funny. At all.

Unfortunately, much like with Gossip Girl, I'm compelled to keep watching just to see how it turns out. It's a sickness but now that I've started it, I have to see it out.