Heather sets Ben up on a date with her sister while the other plot threads are ill-defined and instantly forgettable. 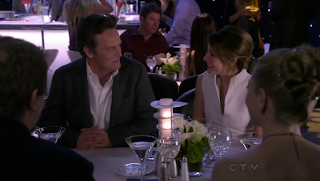 Working under the assumption she is crazy, Ben has avoided giving his secretary Heather his real phone number. Despite this, he is not especially unsupportive to Roman's affections for her. Heather tells Ben that Tony Hawk has set up a meeting about appearing at the Sunshine Center so Ben happily rushes along to the restaurant where he instead finds he has been set up on a blind date with her sister Stephanie (Lindsay Sloane). At first he finds her charming but he quickly realizes that in fact she is simply agreeing with and repeating every single thing he says.

Ben agrees to another date with Stephanie to help Roman wangle a double date taking Heather along. Discussing this with Alonzo later however, he discovers that the person Heather set on fire was actually Stephanie's ex-boyfriend - seems she's very protective of her sister. Not wanting to be mean to Stephanie, Ben instead tries to make her be the one to dump him, claiming to still live with his mom, being broke even licking her face but she just rolls right along with it. He breaks down and admits hating Stephanie to Heather and apologises to Roman that he can't stick around and prepares to leave. However, Stephanie's true self rises up as she derides him as a loser at which point Heather and Stephanie get into a fight with Heather actually defending Ben! Seems Stephanie is always being weird this way and that Heather has a lot more perspective than she is given credit for.

The episode ends on a nice note with Roman and Heather's new relationship going nicely. Ben gives Heather his real phone number at which point she reveals a creepy level of knowledge about his home showing that she's not quite healed all the way just yet... It's not even worth recapping what else went on this week as it was absolutely paper thin and pointless. In the pilot episode, everything revolved around Ben so it wasn't really noticeable, but in last weeks episode and this week, anything not involving Ben was just crap. What's written for Matthew Perry is great, this week was excellent in that regard (Lindsay Sloane was great in her guest role) but I can't give a high mark when the rest surrounding it makes no impression whatsoever.