Annie and Jeff compete for Student President at Greendale Community College. Ahead of Vice President Biden's visit to the college, Abed is investigated for being suspicious. 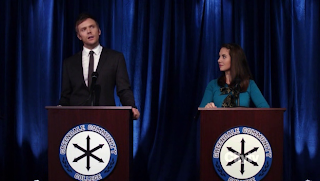 Vice President Biden is visiting Greendale Community College and would like to meet the student president. Only one problem - there isn't one. Time for a snap election! Annie puts her name forward right away, she has a lot of ideas about how to improve Greendale. Because she's ridiculously in love with Jeff, she has handed him a stack of flyers to hand out endorsing her candidacy, but he couldn't be bothered with that and just taped them to the ceiling. Upset, she rants at him about how important the process is. Ever the cynic, he decides to run to prove to her how wrong she is.

The entry requirements are not exactly stiff and come the debates, there are quite a few contestants. While Annie has detailed ideas about making Greendale well known and removing the black mold that is covering a stairwell, Jeff speaks in generalities and pleasantries purely intended to win hearts and minds. Pierce meanwhile is just out to screw with a female candidate Vicki who refused to lend him a pencil. Desperate to compete with Jeff's style, Annie becomes increasingly shrill, focusing in on the black mold issue with rhetoric filled tirades. Contestants are eliminated one by one, including Pierce who quits after Vicki leaves until just Jeff, Annie, Magnitude and old man Leonard are left. Jeff and Annie appear to be neck and neck for the lead, although there's a 98% margin of error as Troy and Abed report.

After a recess however, Annie resorts to smear tactics, having dug up Jeff's old audition tape for Real World: Seattle where he sings a Winger version of George Michael's "Faith". A humiliated Jeff storms from the stage to hide in a supply closet. He is tracked down by Annie, who has quit from the competition, ashamed at the way she devolved and treated him. They talk over their issues, admit their faults then hug and make up. The final debate between Magnitude and Leonard is uninspiring and when the votes are tallied (eleven were cast in total) the winner is South Park!? Biden doesn't even show up at Greendale and was probably too drunk anyway. Jeff and Annie decide to just go clean up the mold themselves.

Abed's side-story about a secret service agent with a crush on him had some good one-liners but mostly left me cold. The final debate between Magnitude and Leonard was uncommonly lowbrow for the show, though it probably reflects the writers actual thoughts on political debates. The resolution was weak, why would South Park win? I don't get it. The rest of it was awesome - full of all the little nuances that make this show great plus an entire lack of Shirley. They continue to tease with this m'lord/m'lady stuff. Joel McHale tweeted out a link for a competition for the best TV couple which they're close to winning... even though they're not actually a couple - but it just feels so right!