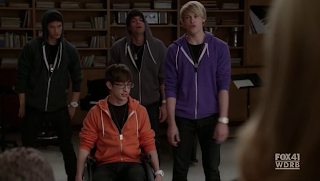 Sue is despondent after the post-Super Bowl episode and tries to commit suicide by chewing hundreds of gummy vitamin A pills. Of course it doesn't work, but when discovered by Emma and Will, one convoluted counseling session alter, she's been placed in glee club because music apparently can heal fractured souls or something. Sam meanwhile is concerned that Quinn's affections for him have dulled, she seems more interested in Finn. She's told hima  suspicious story about how she caught mono from Finn in the previous episode by saving his life with mouth-to-mouth resuscitation. Is big idea is to copy chick magnet Justin Bieber's style. Initially the rest of the glee club derides him but after he performs "Baby" the girls are wowed and boys are bemused.

Mike, Artie and Puck clamour to join Sam's tribute band "The Justin Bieber Experience" as they too want to generate a rise in interest from their respective female partners. They get together and perform "Somebody to Love" at the next session and it works like a treat. Quinn is back into Sam 100% and blows off Finn for a date. Rachel, swinging back from adorable to annoying this week, pays Brittany to copy her style and spread the word about Rachel's fashion sense, but it's not working because everyone assumes that the style belongs to Brittany. She's approached by Sue who wants tips on how to be a diva, but it's just a ploy. Sue also goes to Mercedes asking the same thing and begins to play the two against one another; her true character revealed, she faked a suicide attempt to join glee club and destroy it from within.

Rachel and Mercedes have a diva off singing a song from Rent together but it turns out to be a bonding experience as they kill it and after arguing a bit in the halls, they're best friends again. This annoys Sue no end. Will drags her to a paediatrics ward to sing to the kids together in the hopes of getting the message about what music really means across. Then towards the end of the episode, a bunch of random crap happens. Lauren sings, it's mediocre and actually kind of hideous with her swaying around and stuff but she gets applause and cheers anyway. Then the club practices a big routine but Rachel declares that if they want to have a real edge, they need to write their owns songs and material. FINALLY. Someone said it. Will rejects her idea but Finn approaches afterwards and tells her he will help her so it looks like its going to happen.

Sam and Santana have a talk in the library. He's being fun and goofy but she brings him down by making him realize that Quinn was lying about her thing with Finn. She offers her "services" to him. Later on, Quinn and Sam meet up and he dumps her in favor of Santana. Sue was apparently so inspired by singing to kids that she has taken a role coaching Aural Intensity - the New Directions rivals at regional championships.

Let's get something straight first. Puckerman's pursuit of Lauren is the stupidest television plot line I've seen all year, yes even dumber than anything that's happened on No Ordinary Family. The reason obese chicks in high school get boyfriends is because they put out. If you play hard to get, someone of a nature as established as Puck would move on to the next girl. The only way this makes sense is if he is totally lying about being into her "personality" and just wants another notch on his bedpost but this being Glee I'm not expecting that level of subtlety.

I've never been as big a fan of Sue as other people, anything involving her takes away from the drama unfolding in the kids lives and all of her schemes are ridiculously petty anyway. Rachel's sidequest was kinda funny but I didn't get the comeback thing she kept referring to. Another instance of a writer coming up with a  theme for one character and trying to spooge it over all the characters so they can submit the episode to an academy and blather about what an artist they are. I hope they don't invest too much into this Finn-Quinn-Sam-Santana quadrangle, it's boring me already. This episode just didn't feel quite right. The performance by the foursome was cool and Brittany out-styling Rachel in her own clothes was funny (and hinting of hidden depths to her intelligence) but overall it fell flat.