Cuddy's mom is rushed to the hospital with a heart condition but has a disagreement with House (Hugh Laurie) and fires him as her doctor. Cuddy begs him to remain on the case leading to particularly unethical choices on the parts of both. 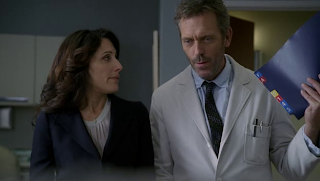 Recap after the jump


Holy crap, I take it all back, this is right back to being my favorite show airing on TV right now. I wasn't sure about the whole House/Cuddy relationship when it began in last season's finale, but without that we would never have received this gift of an episode. Let's get stuck in.

Cuddy (Lisa Edelstein) and her sister Julia (I forgot that she had a sister, I don't think she's been seen before) are trying on clothes with their mother Arlene (Candice Bergen) who is taken ill with heart trouble. House (Hugh Laurie) tries to hide in the morgue with his team, but is tracked down by Cuddy and forced to take the case. Taub and Marthe M. Masters (M³) raid Arlene's home. Taub is looking for Cuddy's yearbook at House's request but instead turns up racy photos of Arlene and a Mexican contractor. Ewwwww. Cuddy didn't know, but Julia tells her it has been going on for five years! This plants a forest of doubt in her mind about her relationship with her mother.

House is convinced that most of Arlene's symptoms are imagined and after playing a trick to make his point to her, she fires him. Cuddy manages to convince her to stay at the hospital though and pleads with House to continue to treat her in secret. House bugs her room and listens in on the feed with the team. Goody two-shoes Masters is suitably appalled and House seems to acquiesce to her objections, sending her to find a new patient for them. While she's out of the room, he pulls together Taub, Chase and Foreman  for the 'real' diagnostic session. He's convinced himself based on their last meeting (in episode 9 'Larger Than Life') that Arlene is an alcoholic and plots with Cuddy, who is already insecure about the bond of trust she has with her mother, to deceive her into taking the appropriate medication.

It doesn't work, because House is wrong (again). The team is diverted by a new patient, a drug addict in a coma. House refuses to speak and instead communicates using a variety of humorous gestures. After Chase informs her that House would only choose a patient if there was something interesting about them, Masters develops a theory for treatment and runs with it. While she's off, House once again gathers his troops for another session on the real case. The solution he comes up with is shockingly unscrupulous, even for him - subverting the medication prescribed by the attending physician Dr. Kaufman, he plans to switch it with broad-spectrum antibiotics while still carrying the label of the original medication prednisone.

Chase can't perform the switcheroo because Julia recognizes him as one of House's team and the same applies for Foreman. Taub meanwhile is called away to his new job - oh yes, Taub has a side gig now. Having moved out of his home after splitting from his wife, she worries about his money situation and sets him up as a medical expert for her brother's law firm. Her brother played by Orson Welles Michael Gladis (Kinsey from Mad Men! Oh, how good it is to see you, I've missed you!) is working on a case and has some of the scans lying around. Taub picks one up and spots what looks like a brain hemorrhage in a boy's head, but Orson tells him to leave it alone.

Masters meanwhile has figured out what's been going on and tattles to Cuddy. After a heart to heart with House where he explains his theory (ok, I'll admit I don't remember any of the medical terminology from this episode, this stuff is way too confusing for me), she performs the switch herself and it goes horribly wrong. What's worse is that because it was done so covertly, Kaufman thinks it must have been the original medication which caused a bad reaction and is basing all future treatments from that incorrect assumption.

A distraught Masters begs House and Cuddy to tell Arlene the truth. After ordering Cuddy out of her own office, House sits Masters down and threatens her not to tell anyone, revealing he set her up to violate a no treatment order on the coma patient and could have her thrown out med school. She breaks down and I want to hug her but her moral fiber wins out and she goes to Dr. Kaufman anyway. He is livid and threatens to report House and Cuddy to the GMC. Arlene settles for changing hospitals as that appears to be the only way she'll be able to get away from them.

As she's about to leave in the ambulance however, Cuddy runs up and makes an impassioned speech, acknowledging that while Arlene has treated her harshly over the years, it was all to push her to achieve and live up to her true ambition and potential. Arlene relents and returns to the hospital, under House's care. He makes some sarcastic comments which she doesn't comprehend - finally, the EUREKA! moment has arrived! Another sarcastic comment about A-Rod's centaur paintings (never gets old) to confirm his theory and he's slicing into her hip - the muscle is black where the hip replacement has degraded - it's heavy metal toxicity, cobalt poisoning. It's treatable and it's all going to work out!

House prevents Masters from leaving again, he seems to admire the strength of her will - to put her own career on the line in order to do the right thing. Taub is facing his own ethical dilemma. He goes to find the boy whose MRI he saw in Orson's office and convinces the kid's mom to have another scan. Orson is pissed that he jeopardized the case and punches him out, promising a lawsuit and threatening him never to go near him or his sister (Taub's ex-wife) again. Foreman reveals to Taub that what he thought was a brain hemorrhage was actually just unusual bone structure in the skull - he had brought a world of trouble on himself over nothing. When he returns home however, his ex-wife turns up to comfort him; she knows that he was only trying to do the right thing, and while he may have been a bad husband, he is a good man.

How is it possible for this show to not have varied it's episode structure at all since the pilot episode and still be so damn good? Outstanding production values. Excellent writing. Superlative performances. This episode was flat out awesome. The use of lighting was milked for maximum dramatic value. The only thing it lacked was Wilson who was oddly missing though I didn't notice until after. Often in this show, the case takes up all the time and the characters are rarely the center of attention. But because of who the patient was and the high stakes involved, everything was enhanced. We were rudely reminded that House really isn't a nice guy at all and we got to see how much Cuddy trusts and relies on him. This episode also told me a lot more about Taub than any other before it.

Will House ever be able to break Masters? It looked like he had finally done it in this episode, but she surprised him again. I can't wait for the next episode, and presumably the return of Wilson. I try very hard to be discerning with my rankings and may end up downgrading this depending on how the rest of the season plays out, but for now I'm still euphoric after such an enjoyable hour of television, so I'll confer my highest grade.